Our Experience at the Rhino Reseller Meeting 2014

We woke up early and started the day with breakfast at the hotel restaurant. Breakfast was as expected – a buffet breakfast with the usual European spread of cold fish, meats, American style eggs and bacon along with numerous breads, fruits, juice and coffee and tea. We ran into Cornelia there and after the introductions we shared a table and ate together. We then left for the new building adjacent to the hotel which seemed to have been built for the purposes of hosting such conventions. 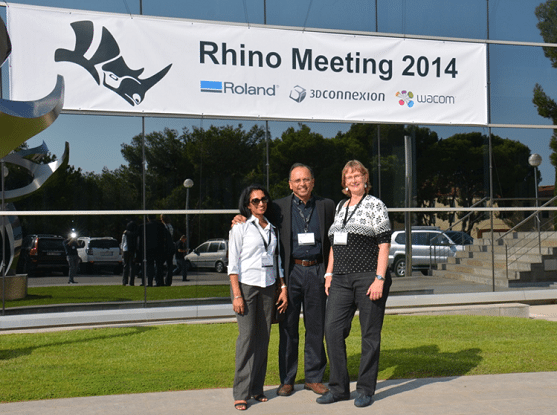 After checking in at the ground floor and got our badges and lanyards, we walked up to the second floor to the large exhibitor hall.  We had a nice spot right in the middle.  I hooked up the computer to the monitor that was provided to each exhibitor.  They also had a nice standing display advertising our booth, using the graphics that we had sent them earlier.  The only problem was that we only had 2 chairs at each table and could not accommodate too large of a crowd.  But overall it was a nice setup, especially since we did not have to haul our booths to setup as we had to do in SolidWorks World.

The first half of the day was to meet with show attendees. For us, it was important to meet with resellers that we have not met or have not had much contact in the last few years.  We met with Bob McNeel, the big boss and told him about our 3DPrint product and asked him for his thoughts.  He promised that he would think about it and let me know.  Leo, our Swedish reseller and long time friend of ours, came by the booth to meet with us and discuss 5 axis features and functions.  I gave him a demo of our new Rhino3DPrint product and he seemed to think it was a nice product but was not sure of the market potential.  Yoko from Taiwan stopped by with an educational reseller who was interested in RhinoCAM.  I gave him a demo of our product as well as the new 3DPrint product.

We all met for a networking lunch after the morning session.  We got to meet and talk with the Rhino US office employees including, Andres and Jackie from McNeel Latin America, Mary and Dale Fugier, Janet Brock, Giuseppe Massoni from McNeel Italy and a few others from the McNeel Spain office.  The lunch was held by the pool and had tables of small bites spread around the place. We just picked up what we liked and walked around talking with people.

The afternoon session started with a welcome talk from both the Spanish CEO of McNeel Europe and Bob McNeel who is the CEO of McNeel and Associates.  The presentation from Bob was interesting since he laid out the current status of the company and also described the future direction of the company.  Rhino has over 300,000 users and was translated into 11 languages.  It was well represented in all the major markets of the world with a strong and loyal reseller channel.  The European office based in Barcelona had seven employees and help with support, marketing, sales and also custom programming and translation services.  Bob detailed that the company was fully employee owned, had no debt and had ‘significant reserves’.  The reseller channel seemed very loyal and technical.  Most of the resellers not only sold and supported Rhino but also obtained a significant portion of their revenue from Rhino training and consulting.

After the first session there was an hour of exhibitor time when we went back upstairs to demo the product and talk with resellers.  After, there was a two hour long session where we saw talks by Brian Gillespe, the product manager for Rhino who talked about Rhino 6.0. This was followed up by a talk on Grasshopper by David Rutter who was in-charge of its development.  Finally Daniel Piker gave a very impressive session on Kangaroo which was a unique product built on top of Rhino that could be tailored to solve complex multi-variable problems.  Some of the applications of this product that Daniel showed constraint solving in sketches and rigid body mechanics. The last session of the day was again an hour or exhibitor time where we went back upstairs to demo the product.

After a long day we finally broke for dinner.  Dinner was at a restaurant called the Restaurant Miramar that was set on a hill overlooking the Barcelona port.  We had a great view of the city on one side and the port to the other. Dinner was another opportunity to network with other resellers and Rhino employees.  We caught up with some of the old acquaintances such as Dale Lear from McNeel US and others we had not met since the last reseller meeting six years ago.

The morning was broken up into two main sessions with a break between the sessions for product demonstrations. The first session in the morning was mostly about the new product Rhino for Mac that was slated to be released sometime in 2015. There was also a discussion of the Food4Rhino site which was similar to the App store for Apple products where third part plug-in developers could publicize and also sell their plug-ins. The final session in the morning was about Elis, the new electronic licensing system, followed by a talk on training and support initiatives that were available for resellers and plug-in developers.

The afternoon sessions in the second day were broken up into two streams, the first one to focus on Sales & Marketing and the second on Development separately. Anita our VP of Sales, was the natural choice to attend the first session while I was for the Development sessions. The first Sales & Marketing session focused on a customer Pivot, who presented a case study of how Rhino was used in the design of a show shoe attachment to standard hiking boots.  This was followed by a very interesting talk about how Rhino was being used in the building of La Sagrada Familia, the Barcelona Cathedral that was originally designed by Antoni Gaudi but that was still under construction.  The Development session focused on the Rhino SDK and the future roadmap for the SDK.  There were also presentations about the Zoo as well as the other tools that Rhino used internally that developers could be using.

The Sales and Marketing session of the morning focused on design and fabrication and featured talks from Maritime Research Department of the Netherlands as well as Foster & Partners an architectural firm.  The Development session of the morning focused on developing for the Mac.  Steve Baer, one of the key developers of Rhino, showed us how to create a simple .net plug-in for Rhino on the Mac.  He also talked about Eto, the cross platform UI package that could be used to develop for the Mac as well as for Windows.  After the hands on session, I had a long discussion with Steve Baer and Dale Lear about development tools as well as how to go about developing for Rhino on the Mac.

The next development session was a one on one session with developers which I decided to skip and attend the Sales & Marketing session which featured presentations from the international offices of Rhino such as McNeel Latin America, McNeel Asia which included S. Korea and Taiwan, McNeel China and also McNeel Japan.  The presentation from McNeel China was impressive in that it really showcased the use of Rhino in large scale AEC projects such as public buildings and other public use spaces.  All in all the different areas in which Rhino was being put to use across the world was impressive.

The last session was an open question and answer session where Bob McNeel stood alone taking questions from the audience. There were interesting questions about the future, pricing and some specific question about how to sell Rhino etc. It was a very relaxed Bob that answered the questions as frankly and as possible and one could not help but perceive his confidence in his company and products. Soon it was time for our last lunch together. But before that it was time for a group picture – a Rhino tradition where all the participants crowd around for a picture.

The session after lunch was an open sessions with nothing really planned. We had decided to skip this session and head out of town since we were going to France and so it was time to say goodbye. We walked around the group during lunch saying goodbye to as many people as possible. The group of people that had come to the meeting seemed like a family to us since we have known many of them for over 15 years. I am sure as the Rhino product continues to grow, carrying our products with it, we will continue meeting with this core group of people in the years to come. In these days of large faceless corporations that are relentlessly focused only on the bottom line, it is very gratifying to be associated with such a fine company and group of people.

Joe Anand has been President and CEO of MecSoft Corporation since 1997. Previously Joe worked for Siemens UGS PLM Software running a Custom Projects group implementing specialized projects for strategic global partners such as GM, Opel and GE as well as working on 3D machining algorithms for the NX product series. Before that he worked at Intergraph Corporation and was responsible for rewriting Intergraph's 3 Axis milling product. Earlier, Joe held senior positions at Auto-trol Technology and GE Calma. Joe earned his MS degree, in Mechanical Engineering from Clemson University with a research emphasis on robot path planning and motion simulation.