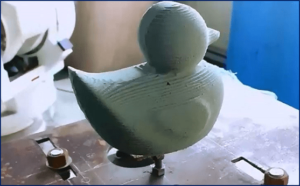 Recently, GoodFA took a video of a ‘proof of concept’ session where they generated tool paths on a surfaced ‘duck’ model using MecSoft’s CAM system, then processed those tool paths through the IRBCAM system to drive a Motoman UR130 robot to machine the ‘duck’ from a foam block. The video shows snapshots of the MecSoft CAM tool paths, then the IRBCAM robot simulation, then finally the actual machining of the foam workpiece using the Motoman robot. With tongue-in-cheek, one must say that the results are pretty ‘duckie’.

The video below is a MecSoft modification of the original video which has been chopped and accelerated to show the full process in just over four minutes of viewing.

Congratulations to our partner, GoodFA, for a job well done and for providing this excellent combination of technologies to your market and clients.

For more information on these three companies and their products visit,

Scott is International Sales Manager for MecSoft Corporation. Before joining MecSoft in 2011, Scott worked for Siemens PLM, and has several decades of experience in the machining industry. Scott has a very strong technical background as well as outstanding people skills which makes him perfect for managing MecSoft’s international resellers & partners.