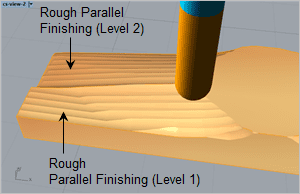 3 Axis Parallel Finishing is the most commonly used toolpath strategy in the MecSoft CAM Milling plugin. It can be used either as a pre-finishing operation or as a finishing operation. In this cut method, the cutter is restricted to follow the contours of the 3-dimensional surface or solid in the Z axis while being locked to a series of vertical parallel planes. However, what you may not know is that Parallel Finishing can also be used as an effective 3 Axis Roughing strategy. The following real-world example is provided by Terry McCafferty of McCafferty Dulcimers of Wilmington, MA.

The orientations of the vertical planes about the XY plane are constant and can be defined by an angle about the X axis. As the cutter follows these vertical planes, it can either form a Zig or ZigZag cut pattern. In the Zig cut pattern, the cutter always goes in a constant direction while in the ZigZag cut pattern, the cutting direction alternates between two successive parallel planes. The tools typically employed in this operation are ball end mills.

The strum hollow and tail portions of the dulcimer fretboard require 3 Axis machining operations. They take advantage of the roughing capability incorporated into RhinoCAM’s 3 Axis Parallel Finishing toolpath strategy. They also illustrate some Best Practices for 3 Axis machining such as using masking surfaces to guide the toolpaths over and around critical areas and the use of overlapping closed 2D planer containment regions. On the left below we see the completed fretboard shown on the CNC machine. On the right we see the completed dulcimer with the fretboard strum hollow and tail shown.

The machining job tree shown here includes the toolpath operations for the fretboard tail. Two 3 Axis Parallel Finishing operations are used for roughing and two are used for finishing. The strum hollow uses separate but identical operations. All dimensions mentioned are in Inches.

In the left side image below we see the 3D surface model of the fretboard in Rhino. On the right we see the stock model (30” x 1.750” x 0.8”) shown translucent over the part model. The surfaces shown in red serve the purpose of protectively masking critical edges that Terry wants to keep the tool away from. In 3 Axis machining RhinoCAM incorporates automatic gouge-free machining of all visible surface geometry. You can also see 2D closed planar curves (shown in blue) that serve to contain the toolpaths in X and Y. The underlying surfaces will automatically contain the toolpaths in Z.

Parallel Finishing in Levels (for Roughing)

To rough out the fretboard stock, Terry uses four 3 Axis Parallel Finishing operations, two for the strum hollow (right & left) and two for the tail (right & left). The stock allowance parameter and the Step-down Z Cuts option on the Z Containment tab of the Parallel Finishing operation are used for roughing. For this job Terry is using 2 cut levels. You can refer to the image descriptions below for more cutting details.

Here are some additional images from Terry’s studio. For more information about Terry McCafferty and the quality Appalachian dulcimer instruments that he crafts we invite you to visit him online at mccaffertydulcimers.com and on Facebook at facebook.com/mccaffertydulcimers/. Enjoy the craftsmanship!