The Atlantic Design & Manufacturing show was held at the Jacob Javits Center in New York City this month.  This year’s show spotlighted 3D printing and Smart manufacturing with a 3D Printing Zone, plus the latest in robots and robotics on display. While not as large as the recent Pacific Design & Manufacturing show held in Anaheim, there were quite a few of the leading manufacturers of software and hardware represented. MecSoft Corporation was invited by Onshape to present at booth 209 along with 3 other companies who have complementary products to the Onshape true cloud based 3D CAD system.

While at the show we were very excited to announce the launch of the Beta program for our cloud CAM product VisualCAMc for Onshape. We have been working hard towards releasing VisualCAMc, and with the official release of the Beta just weeks away, we used this show to announce the launch of this program. You can get a preview of this product here. We are now taking signups here for users interested in participating in the VisualCAMc beta program!

Screenshot of the VisualCAMc in its current form

Steve Woznaik (“Woz”), co-founder of Apple Computer was the keynote speaker at this year’s AD&M show. After his speech and discussion that featured topics ranging from his days at Apple to some of the most exciting technology trends of the day including 3D printing, he stopped by our booth to get a demo of Onshape. Steve spent over 10 minutes at our booth and seemed quite interested in 3D CAD on the cloud! 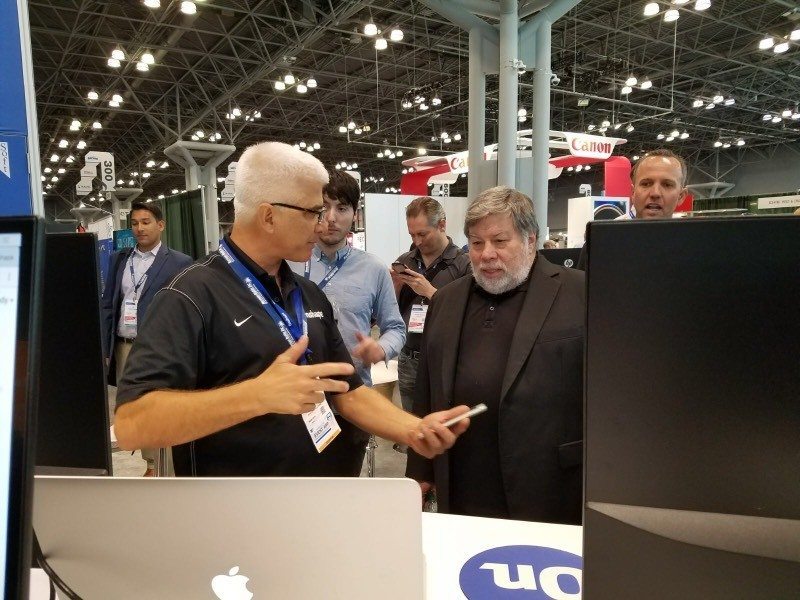 Apart from the opportunity to meet with prospects and customers it was an opportunity for us to meet with the management team at Onshape. The highlight of which was meeting with Jon Hirsctick the CEO of Onshape. Anybody and everybody who has been involved with CAD over the past few years will have heard of Jon, being one of the co-founders of SOLIDWORKS. Having sold the company to Dassault Systemes in 1997, he and the original founding team from SOLIDWORKS founded Onshape to disrupt the CAD industry once again!

The Future is Now!

At the 3-day AD&M show we spoke with hundreds of people who stopped by our booth to see Onshape and VisualCAMc! We also met quite a few of our customers who were walking the show. There was quite a lot of interest in Onshape and cloud based CAM. Based on the reaction to our product demo, we are convinced that we are on the right track. Please stay tuned as we enter this exciting new world of cloud based CAM!

Joe Anand has been President and CEO of MecSoft Corporation since 1997. Previously Joe worked for Siemens UGS PLM Software running a Custom Projects group implementing specialized projects for strategic global partners such as GM, Opel and GE as well as working on 3D machining algorithms for the NX product series. Before that he worked at Intergraph Corporation and was responsible for rewriting Intergraph's 3 Axis milling product. Earlier, Joe held senior positions at Auto-trol Technology and GE Calma. Joe earned his MS degree, in Mechanical Engineering from Clemson University with a research emphasis on robot path planning and motion simulation.