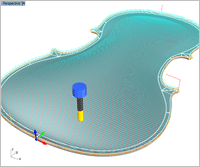 Christopher Dungey of Grand Junction, CO has been hand crafting cellos since 1979. In 2015 Chris purchased a Laguna IQ HHC 3 Axis CNC machining center and RhinoCAM. Chris will readily admit that even with some automation, it still takes 400-600 hours of labor and love to craft a Christopher Dungey Cello with #116 being completed as we speak, within the span of his 40-year career.

However, cello making is an arduous profession that wreaks havoc on the upper arms, wrists and joints forcing short careers on many of his colleagues. With the help of RhinoCAM, Chris is able to automate the task of bulk material removal that 200 years ago would have been performed by apprentices. Chris has agreed to share with us a few of the RhinoCAM techniques he uses in this process.

Chris has spent a considerable amount of time reviewing and tweaking his 3D CAD models until they represent the perfect form that make his cellos unique. In image (a) below on the left we see the top side of the cello as a Rhino 3D part model. Notice the curvature in the front elevation. On the right image (b) we see the stock model in RhinoCAM. The holes at the north and south ends are for alignment while those located east and west are for fastening the stock to the table of the CNC machine.

Please note that all dimensions mentioned below are in millimeters.

It is important to note here that the CNC machine is ONLY used for the bulk removal of excess wood. The final finishing work is all done by Christopher Dungey’s own two hands (see Hand Finishing below).

Now for the tech talk: In the first image (a) below we see a 2½ Axis Profile roughing operation using a 12.5 diameter Ball Mill with the XY Stock allowance set to 3.0 mm and Cut Direction set to Conventional (Up Cut). The Z depth of this profiling operation leaves a 7.0 mm thickness at the base of the stock and two rectangular bridges (20 long x 7 high) at the north and south locations. Refer to the Rough Finishing section below to see the Bridges & Tabs clearly.

The next two operations shown in images (b) and (c) are an interesting use of 3 Axis Parallel Finishing, but used as roughing, again with a 12.5 diameter Ball Mill. In the first operation (b) Chris has a stock allowance of 2.0, a Mixed cut direction, a 46% Stepover and then sets the Lowest Z Containment to 23.0.

This is followed by the same operation (c) but with Stock at 1.5 and the Lowest Z set to 13.5. Both (b) and (c) have Engage and Retract motions set to Linear but with zero length and Approach and Departure motions set to 0.6. This allows the tool to start cutting while centered on the inner edge of the stock left from the previous Profiling operation.

In these next series of images we see the final 3 Axis Parallel Finishing operation and the final 2½ Axis Profiling operation. The Parallel Finishing (a) is identical to the two shown above but with Stock and Z Limit both set to 0.0 and Stepover reduced to 12%. In (b) the second Profiling operation is shown, this time with the XY Stock allowance set to zero and the rectangular bridges (north & south) set to 25 long by 6 high. The north end bridge is shown in image (c). Also notice the scalloping of stock material left on the part shown in image (d). This is by design. The final exterior cut is done completely by hand (see Hand Finishing below).

Here are images of a completed Christopher Dungey Cello.

We want to thank Chris for allowing us to share his story of a modern day Cello Maker and RhinoCAM! To see the completed handcrafted cello shown above, you’re invited to read more about Chris and RhinoCAM here:

the industrial, automotive and consumer products industries. For the past seven years, The Warren Group has relied on VisualCAM for SOLIDWORKS to program the toolpaths they need to drive their two 5×10 Multicam CNC machining centers.

A special thanks to The Warren Group for allowing us to share their VisualCAM success story!

More about The Warren Group

The Warren Group specializes in custom packaging, displays and signage for the industrial, automotive and consumer products industries from their 15,000 square foot facility in Santa Fe Springs CA. From concept & design to prototype & production The Warren Group uses only the best CAD/CAM tools and software on the market, including VisualCAM-MILL for SOLIDWORKS! For more information about The Warren Group we invite you to visit them online at www.studiotwg.com.

The Warren Group located in Santa Fe Springs CA, designs and manufacturers prototype and production packaging solutions for the industrial, automotive and consumer products industries. For the past seven years, The Warren Group has relied on VisualCAM for SOLIDWORKS to program the toolpaths they need to drive their two 5×10 Multicam CNC machining centers.

The Warren Group also designs and machines their own tooling used in the production of thermoformed packaging products. In the example shown here, VisualCAM for SOLIDWORKS is used to produce the toolpaths required to machine this mold block from RenShape® Tooling board on the company’s 3 Axis MultiCAM CNC machining center. The completed mold is used to manufacture the thermoformed 0.020” clear PVC packaging for this product.

Let’s have a closer look.

In the illustrations below we see the 3 Axis Horizontal Roughing toolpath that VisualCAM calculated was needed to rough out the 3” thick piece of RenShape® Tooling board using a ⅜” diameter end mill. The Cut Parameters include a Stock allowance of 0.025”, an Offset Cut Pattern, Mixed Cut Direction, and a 0.125” Stepover. Cut Level Parameters include a 0.375” Stepdown, Depth First cut level ordering and a Bottom Z limit of -2.375”. For Engage/Retract, a Path motion is used with a linear extension of 0.275”. Cut Arc Fitting is applied at each Z level. The estimated machining time is 38 mins.

To begin the finishing process a series of 2½ Axis toolpath strategies (Pocketing, Profiling & Engraving) are used to machine the top and bottom base flanges using a ¼” end mill. Pocketing is used to machine the flange surfaces to a finished Z depth. Profiling and Engraving are used to clean up the edges between the top and bottom flanges. The toolpaths for these operations are shown together below.

For the final finishing four separate 3 Axis Parallel Finishing toolpath strategies are used. Each follows the part surfaces in the Z Axis. The first two cut along the X axis zero direction using part boundary offsets of 1/16” and 1/32” as containment. Cut Parameters include Tool: 0.0625” radius 2 degree carbide Taper Mill, Tolerance: 0.001”, Stock: zero, Cut Direction: Mixed, Angle of Cuts: 0 (zero), Stepover: 10% (of the tool diameter), Z Containment Limit: -2.375, Linear Entry/Exit and Straight Cut Connections. The estimated machining time for the first two operations is just under 15 mins. The second two are identical except that they follow the Y Axis 90 degree direction and are completed in 12 mins.

A special thanks to The Warren Group for allowing us to share their VisualCAM success story!

More about The Warren Group

The Warren Group specializes in custom packaging, displays and signage for the industrial, automotive and consumer products industries from their 15,000 square foot facility in Santa Fe Springs CA. From concept & design to prototype & production The Warren Group uses only the best CAD/CAM tools and software on the market, including VisualCAM-MILL for SOLIDWORKS! For more information about The Warren Group we invite you to visit them online at www.studiotwg.com.

One of the The Warren Group’s Multicam CNC Machining Centers in action.